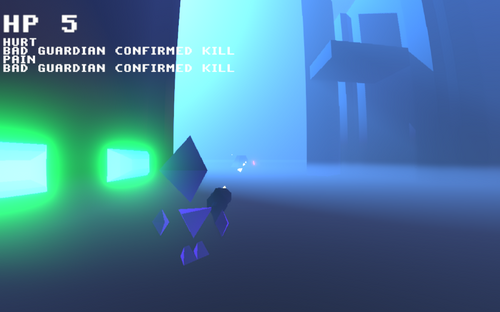 i've been working on HUD stuff and fighting unity's stupid prefab system. In my downtime, I've been assembling a youtube playlist of visual references. It's something of a tradition i have with games i start working on

A little over 3 years ago I was working on a different compo game in Unity where I was going to use trap music. it's where I salvaged the code I use to control the procedural level colors and stuff.

In that game I built this whole system where I could manipulate parts of the game given the waveform of the audio playing, along with a MIDI system that is tied to each in-game music track, with significant events marked out to control lights and platform movement in the game.. sort of a synesthesia effect, and a system similar to what i built for the tap tap revenge games.

On the UI front, I've also found a solution for rendering lines for my HUD and other effects that's both more simple and sophisticated than just rendering meshes with a wireframe shader.

See you in the next update.